On November 21st of 2019, thirty one days after his 70th birthday, AG announces Netanyahu to stand trial for bribery, fraud and breach of trust. This is the first time in Israel’s history that a serving prime minister has faced criminal charges. Similarly, here in the United States, President Trump is under impeachment hearings, the first in 21 years since President Bill Clinton was impeached by the House of Representatives. Are Trump and Netanyahu inextricably linked? Are they part of God’s plan for the last days….

The name Benjamin in the Hebrew means “Son of the right hand” and Netanyahu is currently the longest serving PM in the history of Israel at 4991 days or 13.86 years as of this writing. Recently turning 70 years old, he is also the only Israeli born PM to take office.

President Donald Trump, in his miraculous win for the presidency in 2016, was born exactly 700 days before the nation of Israel was formed on May 14th, 1948. He has done more for Israel than perhaps any president in history. Today, President Trump is 73 years old. Abraham ‘departed’ from Haran at age 75….

With both Trump and Netanyahu under attack, it seems the enemy is winning on all fronts and it is to be expected to a point. We know from the bible that there will be a falling away first prior to the rapture 2Th 2:3 and men will no longer endure sound doctrine 2Ti 4:3 while heaping treasure together for the last days Jas 5:3. All of this continues to come to past.

But all is not lost as the Lord, possessor of heaven and earth has never and will never lose a battle! It is hard to fathom the Lord will take His bride home limping and beaten in defeat. Vengeance and judgment belong to Him. Are we about to see the tables turn on the enemy in this late hour and see the victory of the Lord’s hand in all of this for both Trump and Netanyahu and the church?? Perhaps it has already started.

Will the Epstein scandal lead to the fall of other prominent politicians. If the Lord decides to expose all the corruption that has been plaguing the political scene around the world, it will happen very fast. We may even see cases of treason. In the U.S., punishment for high treason is death.

The bible does not speak of a last days revival before the rapture, but that does not mean it can’t happen. This author believes the Lord will show His hand in a mighty way to bring honor and glory to Himself while blessing Israel and the church before the end begins. Let us see what the final Trump impeachment hearings and trial of Netanyahu brings.

With the failure of Netanyahu to form a coalition after the April 9th vote, Israel is set to vote again on Tuesday, September 17th. In a rare, variable instance on the Hebrew calendar, that date also corresponds to the 17th of Elul. So why is the 17th so important you may ask…..

The word seventeenth or seventeen in the bible always relates to a negative picture. Man reigning in a negative light or an omen of evil that is to come. Noah’s flood started and ended on the 17th.

In the six hundredth year of Noah’s life, in the second month, the seventeenth day of the month, the same day were all the fountains of the great deep broken up, and the windows of heaven were opened. Gen 7:11

And the ark rested in the seventh month, on the seventeenth day of the month, upon the mountains of Ararat. Gen 8:4

Reigning in a negative light.

In the seventeenth year of Pekah the son of Remaliah Ahaz the son of Jotham king of Judah began to reign. Twenty years old was Ahaz when he began to reign, and reigned sixteen years in Jerusalem, and did not that which was right in the sight of the LORD his God, like David his father.2Ki 16:1-2 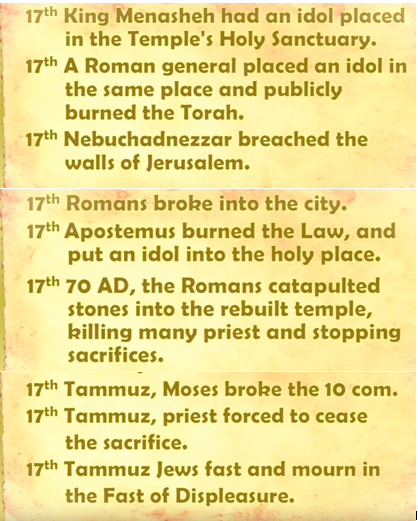 And finally, on “On September 1, 1939, corresponding to the Hebrew date of 17 Elul, the Nazi Wehrmacht invaded Poland, launching World War II. The war would prove to be the deadliest conflict in history, resulting in the death of some 60 million people, including the six million Jews murdered in the Holocaust…..”

So what prophetic result if any will be on this election date for Israel? Will Netanyahu’s reign come to an end? We shall have to wait and see.

Netanyahu wins his 5th term as Prime Minister of Israel. As previously mentioned, Netanyahu is the only elected PM born in Israel since the founding of the state in 1948. If the criminal charges against him are dismissed, he will also soon be the longest serving PM in Israel’s history. Once again we see the hand of the Lord in electing state officials.

So what is next? President Donald Trump congratulated Netanyahu saying:

““The fact that Bibi won, I think we’ll see some pretty good action in terms of peace.” he said. “Everybody said, and I never made it a promise, ‘you can’t have peace in the Middle East with Israel and the Palestinians.’ But I think we have a chance, and I think now we have a better chance with Bibi having won.”

“US National Security Advisor John Bolton said Wednesday that the US administration will roll out its long-awaited peace plan in the “very near future.”

Will we see the announcement of the Third Temple as part of the peace plan?? Is Netanyahu the man that will be in office when the antichrist confirms the covenant??

Pentecost is just around the corner and Netanyahu turns 70 on October 21st. The next couple of months are all but guaranteed to be exciting, perhaps even world changing. I have no way to prove it, but surely time is and has been speeding up in increments for at least two years now….

Watch ye therefore: for ye know not when the master of the house cometh, at even, or at midnight, or at the cockcrowing, or in the morning: Lest coming suddenly he find you sleeping.  And what I say unto you I say unto all, Watch. Mark 13:35-37

If we want to know where we stand on God’s prophetic clock, we must always look to the nation of Israel, for Daniel’s 70th week – the seven year tribulation – is all about the country of Israel.

The book of Matthew was written between 50-55 A.D. and Jesus warned at the beginning of chapter 24 that their temple would be destroyed.

And Jesus went out, and departed from the temple: and his disciples came to him for to shew him the buildings of the temple. And Jesus said unto them, See ye not all these things? verily I say unto you, There shall not be left here one stone upon another, that shall not be thrown down. Mat. 24:1-2.

The book of Hebrews, written to the Jewish people, was written around 65-67 A.D., so the Jewish people were well aware of Matthew’s prophecy for the destruction of their temple by the time Hebrews was available. Hebrews 10:25 talks about an approaching day and later in verse 37 speaks of the soon coming of Christ.

Not forsaking the assembling of ourselves together, as the manner of some is; but exhorting one another: and so much the more, as ye see the day approaching. Heb. 10:25

For yet a little while, and he that shall come will come, and will not tarry. Heb. 10:37

For the Jewish people of that day, they saw the day approaching as the destruction of their temple and was fulfilled in 70 A.D. by the Roman Empire. For today’s Christians, what would that day approaching be? It would be the 70th year anniversary of the establishment of modern day Israel and the soon return of our Lord to follow. Israel will be 70 on May 14th, 2018.

Some interesting facts on Netanyahu, current Prime Minister of Israel.

Do all of those 9’s mean anything? Maybe, maybe not. Though one can’t help but wonder…

So what are we to make of Israel turning 70? At the very least, it is with almost certainty, that God’s prophetic clock will start once more as much needs to be done before the beginning of Daniel’s 70th week and will take perhaps a year or longer to have all in place. For 7 is the number of God’s program on behalf of man; when God is doing something for man, as in the 7000 year plan for mankind or the 490 weeks for Israel or the 7 years Nebuchadnezzar lived as a wild beast in the wilderness. You get the picture.  If we are not taken out of here soon, we will see major prophecy begin to be fulfilled, and there are many waiting in the wings.

When do we leave? Well before Daniel’s 70th week as Jesus told us in Matthew 24.

As you can see, it will be an ordinary day just like today when our Lord returns. We cannot confuse this passage with Jesus physical return at the end of the 7 year Tribulation because at that time, most of the world and 2/3rds of the population will be destroyed and no one will be getting married, given in marriage, or be eating and drinking in a celebratory way.

It will happen as Paul says “in the twinkling of an eye, at the last trump“, 1Co 15:52. Just like when we see a bolt of lighting. “For as the lightning cometh out of the east, and shineth even unto the west; so shall also the coming of the Son of man be” Mat 24:27. “And the LORD shall be seen over them, and his arrow shall go forth as the lightning: and the Lord GOD shall blow the trumpet, and shall go with whirlwinds of the south” Zec 9:14.

I have a ticket out of here on flight #777 with Blessed Hope Airlines on a Titus 2:13 jumbo jet given to me by the Captain Himself. He even promises a free set of incorruptible luggage at the end of the flight and the most wonderful supper I have ever had!

What? Don’t have your ticket yet? Don’t miss the boarding call!! You can ask the Captain for one; His name is Jesus and it is absolutely free. No works needed or waiting in line. Just free for the asking!

For God so loved the world, that he gave his only begotten Son, that whosoever believeth in him should not perish, but have everlasting life. Jhn 3:16

The signed Nuclear Accord Agreement brokered by the US between Iran and other western nations is now official. Many articles could be read and much could be said about the deal, but Netanyahu in his eloquence, sums it up in 40 seconds below.