Northern Thunder….largely avoided in the general media, but clearly an event in the Middle East that should be noticed given it’s current state of turmoil; specifically Syria. Will this massive exercise lead to one of the many destructive prophecies waiting in the wings?

The gathering of one of the largest Muslim force in history is a significant message for Daesch….The drill involves 20 countries, amongst whom, Egypt and Pakistan, both of whom have sizable and equipped armies. Egypt has the largest army in Africa; Pakistan is a nuclear power.

The political and strategic substance of the drill is the show of an army with 350,000 strong troops, 2,500 warplanes, 20,000 tanks and 450 helicopters, under Saudi leadership. The 20-member coalition makes part of a broader 35-member Arab and Muslim (Sunni) coalition put together by Saudi Arabia.

The scene is rapidly changing to more confusion and complexity on many fronts. Time is short. As a Christian, our worst day on earth is nothing compared to what an unbeliever will face. Share Jesus with them while you still have the chance.

For our rejoicing is this, the testimony of our conscience, that in simplicity and godly sincerity, not with fleshly wisdom, but by the grace of God, we have had our conversation in the world, and more abundantly to you-ward. 2 Corinthians 1:12

The upper chamber of the Russian parliament has unanimously given a formal consent to President Putin to use the nation’s military in Syria to fight terrorism at a request from the Syrian President Bashar Assad.

Saudi’s lash out at Assad.

Saudi Arabia insists Assad must go or be overthrown

Speaking in New York after meeting Saudi Arabia’s allies, Jubeir on Tuesday dismissed Russia’s call for a coalition to defend Assad against the Islamic State group as a “non-starter.”

He warned that other countries would step up support for rebels from Syria’s moderate opposition, leaving Assad with no choice but to step down or face what he called the “military option.”

“There is no future for Assad in Syria, with all due respect to the Russians or anyone else,” Jubeir told reporters in New York after meetings with Saudi Arabia’s allies.

If you take seriously the threat of ISIS and Islam and what they are doing to the world today, you don’t want to miss this video. Gary talks again with Middle East and Islam expert Avi Lipkin. You will be surprised at what he has to say.

The coalition of Arab countries attack against the Houthis in Yemen has now been given the name of “Operation Decisive Storm”. Coalition partners below. 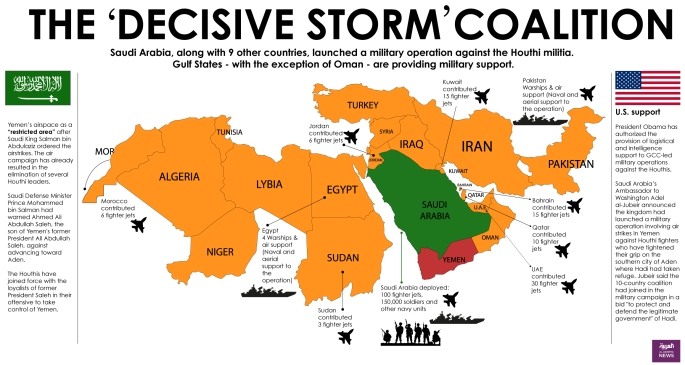 Your guide to ‘Operation Decisive Storm’

Foreign Ministry spokesman Badr Abdel-Atti said that 19 nations have confirmed their attendance in the upcoming Arab Summit scheduled to be held on Saturday 28 March in Sharm El-Sheikh.

The Egyptian delegation is also expected to discuss the creation of a joint Arab army.

Like so many other Middle East countries, the country of Yemen has recently fallen into civil war with the Iranian backed Houthis at the center. With the recent solar eclipse behind us, Saudi Arabia and Egypt in a joint effort, have attacked the country of Yemen. It seems the predictions of Middle East expert, Avi Lipkin are now coming to past. The end game is the capture and control of Islam’s two most holy cities. That of Mecca and Medina located in Saudi Arabia. Both the Sunnis (Saudis) and the Shiites (Iran) want control.

Read about the attack below:

If you missed the previous post with the short Avi Lipkin videos which explain the complex situation in full, they are re-posted below.

We are one step closer…….while the Iran Nuclear deadline is fast approaching…..

You may remember a post here back in December of Avi Lipkin outlining the possibility of the Houthis overtaking the country of Yemen and how that may affect the future of Saudi Arabia. Well that vision has now come to pass as today Yemen’s president, cabinet resign amid rebel standoff.

Yemeni President Abed Rabbo Mansour Hadi has resigned under pressure from Shiite rebels who seized the capital in September and have confined the embattled leader to his home for the past two days.

Presidential officials said Hadi resigned after being pressured to make concessions to the rebels, known as Houthis.

On top of that, the King of Saudi Arabia has died with power currently transferred to his half-brother, but it will be interesting to see what develops in the near future.

The death of Saudi Arabia’s King Abdallah puts the Yemen crisis on the front burner for the king’s successor Prince Salman. Abdullah’s death comes on the heels of the resignation of Yemeni President Abed Rabbo Mansour Hadi, which is a major setback for American and Saudi diplomacy, a limited victory for Iran and a plus for al-Qaeda.

Remember that ISIS has threatened to invade Saudi Arabia and the Saudi’s have taken the threat very seriously as they are determined to build a 600 mile wall to keep them out. 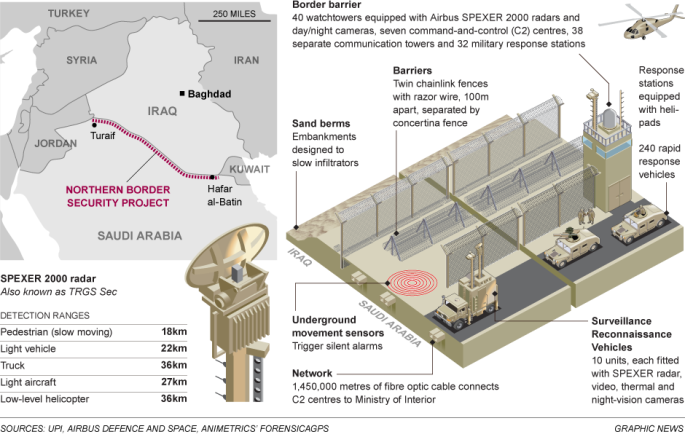 Link to the original post with Avi Lipkin here: https://atharris.wordpress.com/2014/12/01/middle-east-in-the-midst-of-the-storm/

Why does ISIS continue to destroy temples, tombs and even Muslim mosques wherever they go? What point are they trying to make? It’s strange that they would even destroy their own places of worship.

But yet, there is a real reason behind it. They see themselves as a more ‘pure’ type of Islam and are out to destroy that which is not.

What these groups are doing is based on an endemic Salafist principle common to most Salafist movements, whether they are jihadists or not. This principle underlines the need to purify the earth of polytheism and disbelief. These groups consider religious shrines or any other sites related to a certain person to be a kind of sanctification, which is, according to them, a true sign of polytheism.

The destruction of these sites is part of the process of returning to the authentic Islam and eliminating all alien elements, according to the Salafist understanding. This contradicts the traditional understanding of Islam by all Muslim confessions, which means that Islam does not contradict other sanctities, but rather understands them and considers them sacred, especially when the people of these sacred places are prophets of the Quran, such as the prophets Jonah and Daniel and many others from both the New and Old Testaments.

The destruction of sacred places also happened during the establishment of Saudi Arabia, which was described as the first political entity for Salafists in the Islamic world.

While it cannot be confirmed, ISIS has threatened to destroy the Kaaba or black stone in Mecca. It is the holiest site of all Islam. Men walk in a circle around the Kaaba.

ISIS is leaving a path of destroyed churches, shrines and mosques in its wake as it storms across Syria and Iraq, and has even set its sights on Mecca — Islam’s holiest site.
“They see themselves as the last defenders of Islamic civilization and want to eradicate anything that they see as the enemy of Islam, and any Muslim they perceive as compromising with the West,” Yvonne Haddad….

Will they attempt to do so and will they succeed? The following video was filmed in 2012 and although does not mention ISIS, it presents a very plausible scenario that ISIS could indeed at least attempt to do so with respect to what is happening in the Middle East today. The video is also packed with other Biblical facts and tidbits that make a very interesting view. Pay attention when Avi mentions the Arab Spring midway and particularly towards the end of the film.

The land promised to Israel is much greater than what they poses today, and the day is coming soon when they will expand their borders.

24 Every place whereon the soles of your feet shall tread shall be yours: from the wilderness and Lebanon, from the river, the river Euphrates, even unto the uttermost sea shall your coast be.

Watch the video for more information guaranteed to turn on ‘light bulbs’!