The infamous 9th of Av will fall on August 4-5, a week from today.  Menachem Av is the 5th month on the Jewish calendar. Why is this significant?

Clearly the 9th of Av historically has been a day of judgment against Israel. Will something of significance happen this year? Israel does not currently have a temple but there is some new significant movement in this area with the recent statement of finding a perfect Red Heifer and now a campaign to complete architectural plans for the Temple.

The Temple Institute launches an Indiegogo campaign to build the Third Temple, under the title: ‘Don’t make history, make the future.’

“Now is time for one of its most ambitious projects yet: completing architectural plans for the actual construction……

“It is not enough to wait and pray for the Third Temple,” it concludes. “It is a Biblical obligation to build it.”

The Temple Institute’s campaign will run for sixty days, ending on September 25 – during the Jewish New Year, or Rosh Hashana.

The campaign aims to raise $100,000 toward a building fund for the Third Temple, as part of its wider campaigns to train kohen-priests for Temple duties and rebuild the instruments in the priestly services.

Building the temple, says the Indiegogo campaign statement, would “usher in a new era of universal harmony and peace,” as prophesied in the Bible.

As Christians know and understand, the building of the third temple will usher in the 7 year Tribulation.

15 When ye therefore shall see the abomination of desolation, spoken of by Daniel the prophet, stand in the holy place, (whoso readeth, let him understand:)……….

21 For then shall be great tribulation, such as was not since the beginning of the world to this time, no, nor ever shall be. Mattthew 24:15-21 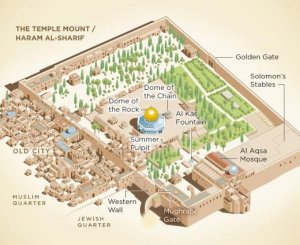