The Israeli ground invasion of the Gaza Strip has officially begun.

The first hours of Israel’s Operation Defensive Edge ground phase against Hamas were marked by heavy artillery and air pounding to soften up the terrain as the ground forces went in Thursday night, July 17. The troops advanced in two heads – one north to Jebalya and Beit Lahiya and the other south, where it went into action initially against Khan Younes and Rafah. The densely populated Gaza City has not been broached as yet. 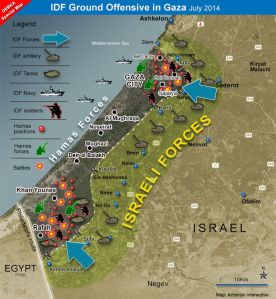 Prime Minister Binyamin Netanyahu told a special cabinet meeting Friday that the IDF is preparing to expand its operation in the Gaza Strip. “Terrorist tunnels can’t be destroyed just be air power,” he said. Defense Minister Moshe Ya’alon said the operation will go on for as long as needed. “Those seeking to disrupt our lives must pay the price.”

Meanwhile the Palestinian relationship with Egypt seems to be changing.

Thursday night, Egyptian Foreign Minister Sameh Shokri said that Hamas was responsible for what was happening. He said, “Had Hamas accepted the Egyptian proposal (for a ceasefire) it could have saved the lives of at least 40 Palestinians.” Shokri said that Hamas was at fault for the IDF’s need to enter Gaza in a ground operation. He accused the Palestinian Islamists of harming not only Palestinian interests but also Egypt’s national security by associating with Turkish steps to undermine Cairo’s efforts for a ceasefire in Gaza.

The West Bank Palestinian’s are now looking to Turkey to produce a ceasefire negotiation.

Palestinian president Mahmud Abbas was to head to Turkey on July 18 to push a ceasefire in Gaza after Egyptian-mediated negotiations stalled and Israel launched a ground operation.

Cairo has been the hub of intense negotiations to end the 11-day conflict between Hamas and Israel, after the Palestinian militants in Gaza rejected an initial Egyptian truce proposal.

Egypt, under recently-elected President Abdel Fattah al-Sisi, has moved to isolate Hamas, accusing it of backing insurgents on its own territory.

Hamas ultimately wants the Rafah Border Crossing to the Egyptian Sinai opened which is currently closed by Egypt in their promise to “help” Israel. Opening this border crossing will allow Hamas to survive and ultimately allow for other insurgents including possibly the IS (Islamic State) to enter into the attack on Israel via the Sinai Peninsula.

Hamas may be aiming its missiles at Tel Aviv and Jerusalem, but Israel was ultimately a hostage in the Islamists’ effort to get closer to Cairo.

Hamas wants this in order to bring an end to the blockade on Gaza, open the Rafah Border Crossing, and in many ways to ensure its own survival……..

The bottom line is that the key to solving the current escalation was — and remains — in Egypt’s hands, not in those of any other Arab or international party. Hamas demanded the opening of the Rafah crossing between Egypt and Gaza from almost the first minute of the operation. Egypt rejected the idea immediately, as long as Hamas stands on the Palestinian side of the crossing. But Cairo has emphasized that, if there are Palestinian Authority forces under Mahmoud Abbas deployed there, it has no objection to opening the crossing.

Read more: Hamas’s war is ultimately with Egypt | The Times of Israelhttp://www.timesofisrael.com/hamass-war-is-ultimately-with-egypt/#ixzz37pkcXtWM
What role will Turkey now have in this ongoing conflict? Will they persuade Egypt to open the Rafah Border Crossing and will it lead to the  fulfillment of Ezekiel 29:7 against Egypt? The Turkish PM has again lashed out at Israel.

Turkish Prime Minister Recep Tayyip Erdoğan once again lashed out over the shelling of Gaza on July 18, claiming that Israel was committing “genocide” of the Palestinian people.“[Israel] has never pretended to be pro-peace. It has always tormented [the Palestinian people] and today it is continuing to do so,” Erdoğan said, stressing that good relations with Israel were “impossible” under the current circumstances.“The government and I will never look positively [at Israel] as long as we are in power … [Israel] may seem like the winner for now. But it will eventually be defeated,” Erdoğan added.Erdoğan also slammed Egyptian President Abdel Fattah al-Sisi as an “illegitimate tyrant,” saying Cairo could not be relied upon to negotiate a ceasefire with Israel.
“Is Sisi a party [to a ceasefire]? Sisi is a tyrant himself,” he told reporters.

7 When they took hold of thee by thy hand, thou didst break, and rend all their shoulder: and when they leaned upon thee, thou brakest, and madest all their loins to be at a stand Ezekiel 29:7